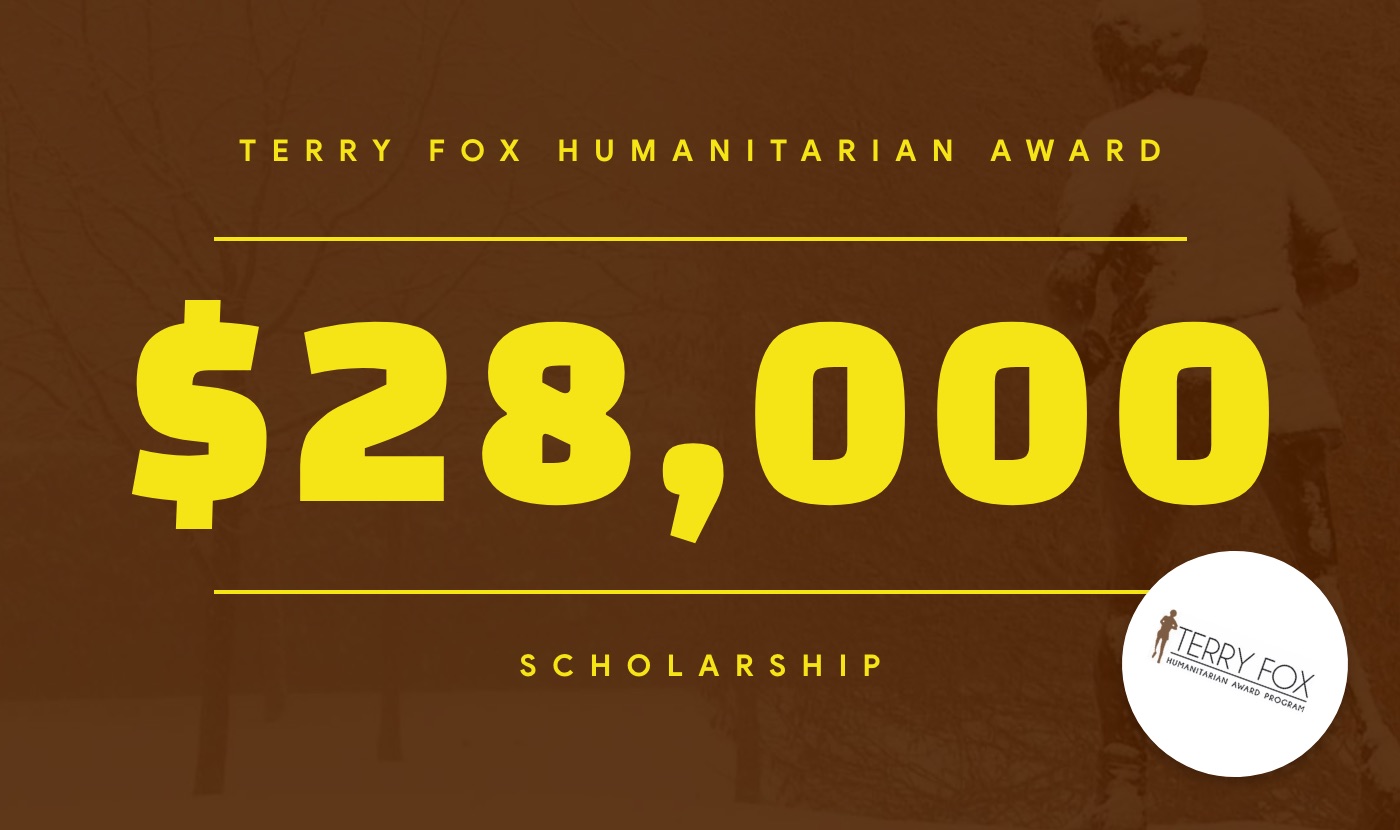 Are you a good Samaritan? This award could be for you.

You could win $28,000 for helping to mobilize humanity with the Terry Fox Humanitarian Award.

Two skips, a step with his prosthetic leg, and a dream to kick cancer’s ass 42 km at a time. Terry Fox presented a unique mission to revolutionize the disease affecting nearly one in every two Canadians.

Terry ran for 143 days, conquering a total of 5,373 kilometers (3,339 miles) before his mission came to a halt on September 1st of 1980. He wrapped up his final run in Thunder Bay, Ontario, when the osteogenic sarcoma (bone cancer) in his right leg had found its way to his lungs.  Unfortunately, Terry passed away in June of 1981.

But with his name attached to 15 highways, 14 schools, and $780,000,000 raised for cancer research, it’s no surprise that Terry’s legacy continues to impact millions of lives across the globe — making him one of the most influential leaders in Canadian history.

In some ways, though, Terry was just like you — seizing opportunities day-by-day and measuring progress through a series of small victories. Pass that post, then that school, and that wave of oncoming traffic. Or, in your case, maybe it’s passing (*ahem* crushing) that exam, that class, and that semester.

But, aside from kill’n your exams, essays, and dreaded group projects (oh, the horror) — you might even embody some of the high ideals that Terry fostered such as performing community service and humanitarian work while striving for excellence in amateur sport and fitness.

In that case, this award might be for you.

What is the value of the award?

Let’s assume for a second that you were about to receive the Humanitarian award.

The Terry Fox Humanitarian Program would grant you up to $28,000 over the course of four years. Each year, they would issue $7,000 to your school through two separate installments of $3,500. The first installment would occur in September, and the second in the following January.

The Program also caps you at receiving a total of $15,000 in awards annually (including the Terry Fox Humanitarian Award). So, if the sum of all the awards you will be receiving exceeds this amount, the excess balance would be deducted from your Terry Fox Award.

And lastly, if another source is covering your academic expenses, you can choose to decline acceptance of the financial portion of the award and still receive the distinction of being a Terry Fox Scholar (so basically, you’d still get bragging rights without the $$$).

Why was this scholarship created?

The Terry Fox Humanitarian Program began in 1982, following Terry’s passing in June of 1981. The Canadian Government sees the award as a way of honouring Terry’s mission to revolutionize cancer research and awareness while creating a drive in Canadian youth to seek the ideals that he embodied, through post-secondary education.

So basically, the Award favors students who demonstrate a passion and commitment towards humanitarianism, athleticism, courage, and compassion — just like Terry.

Would I be eligible for the award?

If you think you could be a strong candidate for the award, here’s what you’ll need:

Think you’ve got what it takes? Let’s find out more.

How does the evaluation process work?

Basically, it will all boil down to your academic performance, references, and personal essay showcasing your involvement in humanitarian activities.

Here are some starting points to consider in your application:

The Humanitarian Program will review all student applications submitted by the deadline, February 1st. IMPORTANT NOTE: Your application must include three qualifiable references, such as an employer, supervisor or teacher (PRO TIP: though we’re confident Mom and Dad would give you a glowing reference, that won’t count as qualifiable). The Humanitarian Program will email a link to your referees requesting they complete an online Referee Form on behalf of you, the applicant.

The selection team will then invite a shortlist of candidates to participate in an in-person interview, typically in your home province and with a panel made up of Terry Fox Humanitarian scholars, alumni, and associates of the program.

Interviews usually occur in April, following the applications in February. FYI, you are responsible for your travel arrangements to and from the interview (so, if you’re planning to skip, step and repeat your way to the interview, be sure to give yourself enough time ;).

The Selection Committee will then recommend worthy candidates to the Terry Fox Humanitarian Award Program’s Board of Directors (professional individuals and TFHAP Alumni from across the country) who will ultimately decide which students will receive the awards at the Annual General Meeting. This typically takes place in May or June.

If the Executive Director and Board of Directors select you as a recipient of the award, they will call you after June (LIFE HACK: if GiGi Philips taught us anything in He’s Just Not That Into You, it’s that waiting by the phone won’t make it ring. So, try not to spend too much time pondering by the phone. Remember, that life skips on and there are plenty of other scholarships out there).

Are there any key dates that I should be aware of?

So, here’s the breakdown:

Just like that. Easy peasy steak and cheesy. For more insights on how to crush your application, check out “Scholarship Applications 101: Terry Fox Humanitarian Award.”

Looking for more ways to make student stuff easier? yconic is all about preparing Canadian students, like yourself, and your parents for college and university. That means matching you with the right school. It also means helping you with tuition costs and providing advice on how to live your best post-secondary life.

Check out yconic for (what we like to call) the ultimate student manifesto.

FEATURED
Deadline
December 31, 2022
Subscribe for scholarships right to your inbox